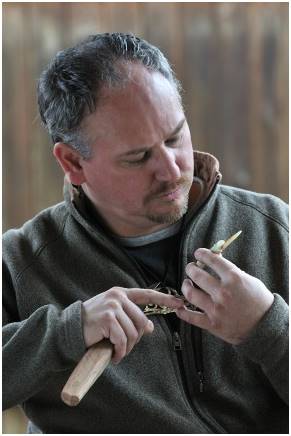 Aaron Nelson-Moody, or "Splash", lives and works in the Capilano Village on the North Shore of Vancouver, British Columbia. These days he is working mainly on jewelry engraving and repousse, and still carves the larger houseposts and panels on commission.

While Aaron is his English name, he also has his Squamish Nation name, Tawx'sin Yexwulla, which translates as: Splashing Eagle, so most people know him simply as "Splash". He also carries the name, Poolxtun, from his adopted father Gerry Oleman, which he tanslates as, ‘the spreading ripples from a splash of water’.

He has worked with community groups and students in a number of schools in the Squamish and Vancouver areas since 1995, as well as sharing in Japan and Scotland. He has recently been carving a housepost at the British Columbia Institute of Technology, and is currently working at Langara College teaching a Truth and Reconciliation based Aborignal carving cohort program. Some other highlights of his work has included: