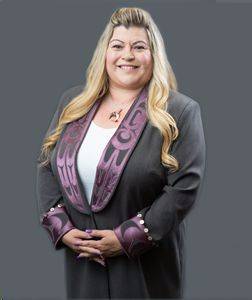 Celeste Haldane was appointed Chief Commissioner in April 2017. Prior to this, she served as an elected Commissioner for three two-year terms commencing in 2011.

Celeste is a practising lawyer and holds an LL.M. in Constitutional Law from Osgoode Hall Law School [York University], and an LL.B. and B.A. both from the University of British Columbia. In 2015 she began her Doctorate at UBC in Anthropology & Law.

The Provincial Government appointed her to serve on the UBC Board of Governors and the Legal Services Society. Celeste is the first Indigenous chair of the Legal Services Society. Celeste is a director of Brain Canada and the Hamber Foundation, and an active member of the Canadian Bar Association and the Indigenous Bar Association. She is a 2015 alumni of the Governor General’s Canadian Leadership Conference.