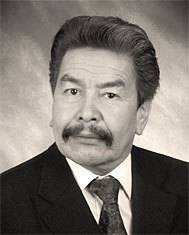 Before being elected to the Squamish Nation Council Chief Bill Williams, talalsámkin siyám completed his educational back ground in business administration and marketing.  His dedication and perspective comes from his understanding of the importance of passing on the knowledge of cultural and spiritual values in his work and everyday life

Chief Williams has severed as the Council Co-chair for the Squamish Nation and was appointed this position by the 16 member council for last four terms of his elected time in office. During his term as an elected representative Chief Williams has helped the Squamish Nation grow from a staff of 20 with a million dollar budget to a governing body with 350 staff and a budget of $55 million. As a First Nation the Squamish Nation is at the leading edge of business and development in Canada and British Columbia. Development within the traditional territory, on reserve, and protection of natural resources has been a key goal throughout Chief  Williams career.  The Nation balances revenue generation with preservation as seen in the management of Timber Forest Licence 38 which was purchased by the Nation in December 2005. TFL 38 consists of 211 hectares of land and forest rights within the traditional territory and Chief Bill Williams serves as the President of Northwest Squamish Forestry the forestry arm of the Nation. Chief Williams is President of Provincial Forestry Board for all Native Communities.

From the establishment of the Squamish Nation traditional territory and its recognition by the Province of British Columbia and the Government of Canada, to the signing of the Strategic Land Use Agreement with the Province in 2007, Chief Bill Williams has helped craft the agreements and collaborative tone of the Nations relationships. These efforts will see the protection for future generations, areas within the traditional territory, such as the Wild Spirit Places, village, and cultural sites.

For his unwavering commitment to protecting these areas Chief Bill Williams was given the Eugene Rogers Award for Leading Conservation Efforts by Western Canada Wilderness Committee. For his work promoting business relationships in 2005 Chief Williams was named one of the top 10 leaders of Big Business in British Columbia by Vancouver Business Magazine, and in 2006 he was second to the Top of the top 50 Successful Business in  B.C.  As well, Chief Williams has twice been recognized by the Provincial Government Premier’s Awards for being a leading Negotiator for deals which benefit the Community.

Chief Bill Williams was instrumental in the development of a world class cultural centre located in Whistler British Columbia.

Chief Bill Williams Co Authored a Book Called “Picturing Transformation” about bringing 11,000 People out on the Land over a 10 year period.

As Lead Negotiator for Squamish Nation Aboriginal Rights and Title Projects like Whistler Blackcomb are being developed with commitment to Protect the land through Environment and Wildlife with Spiritual and Cultural Lens of Squamish Government.