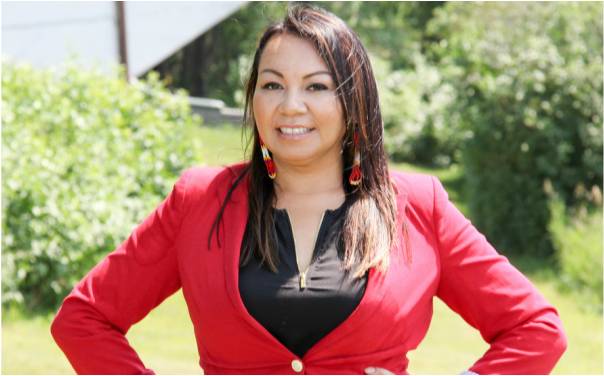 A member of Bunibonibee Cree Nation, Grand Chief Sheila North moved to Winnipeg at age 15 to pursue her education.  Grand Chief valued the educational opportunities she had and achieved completing two diplomas from Assiniboine Community College in Business Accounting and Rural Development focusing on community development . After completing her diplomas at Assiniboine Community College, she decided to pursue a career in journalism obtaining certification in radio and television broadcasting from the Academy of Broadcasting Corporation and a Creative Communications diploma from Red River College. Sheila is in the process of completing a degree in Political Science at the University of Winnipeg.

Prior to becoming the Grand Cheif of MKO, Sheila North worked as a journalist for CBC for seven years, an entrepreneur, a Cree translator, economic development officer, radio personality, Chief Communication Officer at Assembly for Manitoba Chiefs, and as a correspondent with CTV News up until being elected as Grand Chief in September 2015. Manitoba Keewatinowi Okimakanak is one of the largest First Nations political tribal organizations in the country, covering 2/3rds of Manitoba and representing approximately 73 thousand citizens.

One of Sheila's passions for a number of years has been working with the Indigenous and non indigenous communities to raise awareness about the national tragedy of missing and murdered Indigenous women (MMIW).  Sheila continues to work closely with families, friends and Indigenous and non- Indigenous leaders to support advancing action to address the issue of violence against Indigenous women that has resulted in the current crisis. She has successfully been able to engage people to respond to the critical issue of MMIW, including her most recent efforts in a documentary she co-produced with Leonard Yakir “1200+” that highlights some of the systemic issues that place Indigenous women at greater risk for violence and sexual exploitation.

Grand Chief North has also lead many other initiatives related to advancing Indigenous issues in Canada. During her time at AMC, Sheila helped to galvanize national and local movements including actions in response to the Crown-First Nations Gatherings that were held in 2012, developing communications strategies to engage both grassroots and Indigenous leadership in Consultation and Accommodation issues with respect to Natural Resource extraction, and a national engagement strategy to respond to the First Nations Education Act proposed by the Federal government in 2014. Grand Chief Sheila North has also worked with Manitoba First Nation political leaders to ensure that Indigenous voices are heard through a sharing of stories to educate Indigenous and non-Indigenous people.

Grand Chief Sheila North is a gifted writer and listener who brings passion, empathy and commitment to her Leadership. Grand Chief Sheila North is a multiple Radio-Television News Directors Association (RTNDA) award winner and Gemini Award nominee. She was most recently recognized in Chatelaine Magazine as one of the top 30 women of 2015 and by media personality Ace Burpee from Virgin Radio as one of the most fascinating 100 Manitobans to watch.
Grand Chief Sheila North has been recognized for her efforts building bridges of understanding between Indigenous and non-Indigenous communities during her time in media and in her current role as the leader of Manitoba Keewatinowi Okimakanak. She is driven by her passion to create greater awareness among Canadians about indigenous people, their cultures and shared history in Canada to move towards building relationships in the sprit of achieving true reconciliation.

Sheila is supported by her two children, Trisha and Sonny and her immediate and extended family.