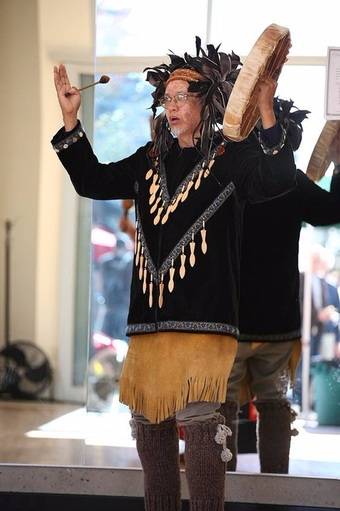 Latash - Maurice Nahanee is a member of the Squamish Nation and lives in North Vancouver, BC. Latash has a Bachelor of Arts degree from Simon Fraser University (English Literature Major) and an Associate degree in Arts and Science from Capilano College.

Nahanee has experience and training in business management and owning a business. After graduating from university, Latash worked as a journalist for ten years. He is the former CEO for the Native Communications Society of BC and the owner manager of the public relations company All Write Productions. In June 2012, Latash launched Seven – Your Indigenous News Source, a tabloid national newspaper distributed across Canada. He is also the owner/manager of Latash Native Arts, a company that sells Native art products and provides cultural presentations and cross-cultural workshops.

As a life long learner and practitioner of Squamish culture he is proud to share his cultural locally and internationally. Latash has travelled overseas to Asia and Europe as a cultural ambassador for the Squamish Nation. He has performed in Taiwan, Japan, Switzerland and Italy. Latash travelled abroad to share traditional songs and dances at cultural festivals. His cultural teachings came from the example of his parents and community elders.

As a traditional artist Latash enjoys wood sculpture, painting, glass etching, performing traditional music and story telling. Latash has travelled overseas to Asia and Europe as a cultural ambassador for the Squamish Nation.

Latash also continues to perform with the Chinook SongCatchers. The core group is made up of his wife and daughters. They have been performing together for 23 years.

Latash has retired as a First Nations Support Worker in North Vancouver School District. He worked with First Nations students and non-aboriginal students from grades one to 12 providing cultural and academic support. He was also an itinerant speaker at various NV District schools on Truth and Reconciliation, colonialism and First Nation art.

Maurice Nahanee's Squamish ancestral name is Latash. Thirty-four years ago the Nisga’a Killer Whale tribe in Gitwinksilkw in the Nass Valley adopted him and gave him the honourary name Gilx Buwx. Leiloa Baker gave him the Hawaiian name Kaipo. She is a Hawaiian from Hawaii and is married to Chief Lance Baker. Latash also has Hawaiian ancestry and descends from King Kamehameha’s family.