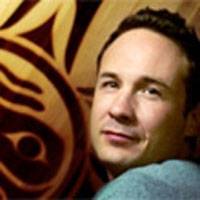 Shain Jackson is Coast Salish from the community of Sechelt. He is a lawyer who has represented the interests of Aboriginal communities and organizations throughout British Columbia in relation to a broad array of issues. After years devoted to the legal profession Shain has taken a break to follow his passion as an artist.

Artistically, Shain works in Coast Salish design. As he has continued to develop his own artwork to a higher level, he has had the privilege of collaborating with many amazing local artists. Along these lines Shain has devoted much of his time to the protection of artists’ rights.

Currently Shain is the President of Spirit Works Limited, an Aboriginal owned, operated and staffed company focused on the design, production and distribution of Aboriginal artwork such as jewelry, bentwood boxes, paddles, and so on.

Shain has always taken very seriously his responsibilities not only to his own community, but to the urban Aboriginal community at large. Further to this, through his company Spirit Works, Shain: has developed programs aimed at providing employment and training to Aboriginal youth; donates space, equipment and expertise to Aboriginal artists in need; consistently donates time and artwork to numerous charitable organizations; has designed and facilitated workshops aimed at providing cultural teachings for at-risk Aboriginal youth; and much more.